The High Dike (De Hoogendijk) has been laid out in the 13th century in the western part of The Netherlands and replaced the Oudedijk (The Old Dike). The construction of the Hoogendijk, that protects Holland almost entirely against floods from rivers and the North Sea, was ordered by Willem II van Holland (1227-1256). After his death the work was continued under supervision of his sister Aleid van Holland (1228-1284). To commemorate her groundbreaking work a statue of Aleid van Holland has been established in 1991, in Schiedam, The Netherlands. Construction of the Hoogendijk started around the year 1250 and was ready by 1270.

The Hoogendijk starts in Schiedam and routes via the city of Rotterdam towards the Oosthaven of the city of Gouda (see picture below). It follows basically the Northern bank of the rivers Nieuwe Maas and the Hollandse IJssel. Nowadays the dike ends at the Julianasluis near Gouda; from 1856 till 1936 the dike ended at an upstream lock called Waaiersluis. The old name of the dike is De Hoogendijk or De Hooge(n) Zeedijk (The High Sea Dike); nowadays the collective name is Schielands Hoge Zeedijk. The Hoogendijk is maintained by ‘Het Hoogheemraadschap van Schieland en de Krimpenerwaard‘ and classified as a primary waterbarrier. The total lenght of the dike is 27 kilometres. 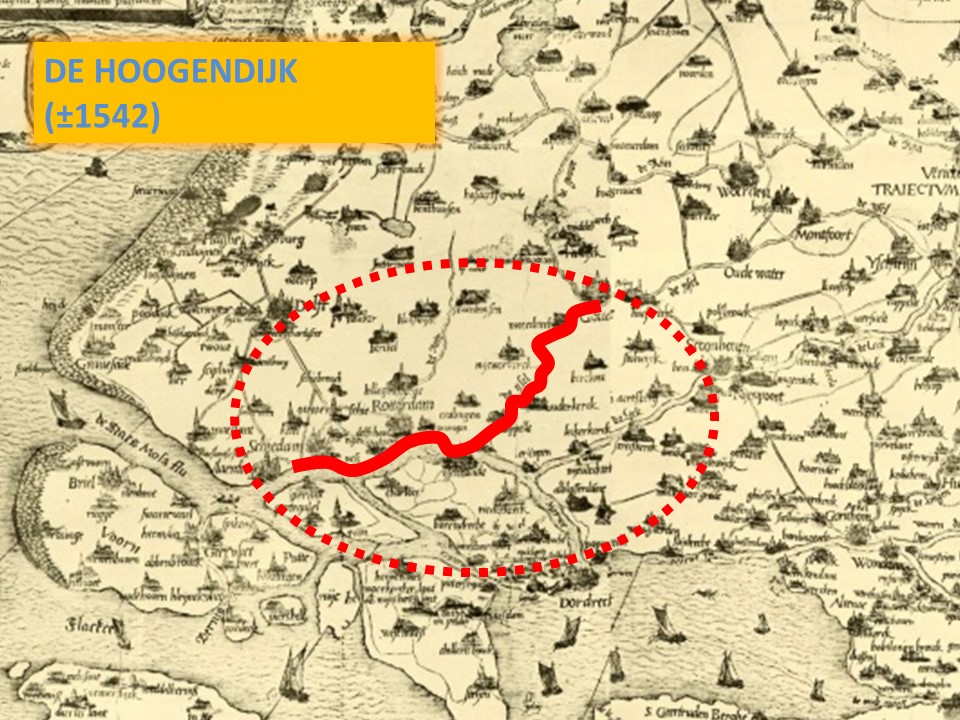 Exact location of De Hoogendijk (The High Dike) in Zuid Holland, The Netherlands.

The earliest proof of the existence of the Hoogendijk (Hooghen Zee-dijck) can be found in “Keuren ende ordonnantien van ‘t Heemraedschap van Schyelandt ende den gevolge van dien”, published in 1623 (see below). The first picture of the dike can be found on a drawing of the city of Rotterdam (made by G. Myts around 1650). The first newspaper that calls the Hoogendijk was the Oprechte Haerlemsche Courant in 1709. The name is also mentioned on a drawing of a windmill (made by K.F. Bendorp in 1784). 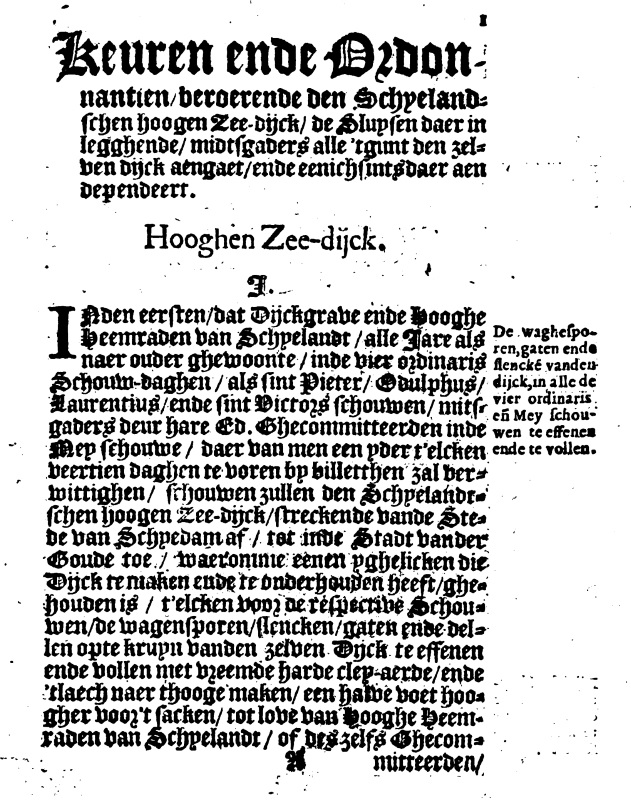 It is obvious: our family has been named after this very important dike. Willem Willemsz Semaker (Hoogedijck) (1630-1719) is believed to be the first one who has used Hoogendijk as familyname. He was a shipbuilder / shipyard owner and lived close to the dike in Capelle aan den IJssel (in the neighbourhood called Keeten).

As mentioned the Hoogendijk protects Holland almost entirely against floods from rivers and the North Sea. The height of the dike has in the past been increased regularly due to the fact that the farmlands alongside the dike were dropping constantly (due to drainage and oxidation of the peat). Since the 15th century those farmlands have dropped some 137 inches compared to sealevel. Despite the growing height of the dike (and therefore increased pressure on the dike) the Hoogendijk was never breached by floods or high tide or a combination of both, though the All Saints’ Flood of 1570 indicated its weakness.

In 1574 however the dike was pierced on purpose at 16 places due to the “siege of Leiden”. This significant event is still remembered with a mooring called “Dukdalf Willem van Oranje” on the dike just east of the village of Capelle aan den IJssel.

The dike almost broke in January 1682 in the neighborhood of Kortenoord (village of Nieuwerkerk aan den IJssel). In February 1953 the dike almost broke again due to a very huge flood (Watersnoodramp); one hole near the village of Nieuwerkerk aan den IJssel was sealed with a ship. After a few days the authorities stated that the dike had withstand a flood of a size that was never seen before. A permanent flood-barrier was established in 1958 near the village of Krimpen aan den IJssel; therefore the dike west of the flood-barrier became of more importance and was made stronger and higher than the dike east of the barrier.

In 2014 it was concluded that parts of the Hoogendijk didn’t meet anymore the most actual requirements for primary waterbarriers. Especially near the village of Capelle aan den IJssel significant work needs to be executed. Complicating factor at this location is the tight space between the dike and the residential area.